Find out more about Yoga Dance

What Are the Best Yoga Retreats in Asia?

The African Origins of Yoga

Many people believe that yoga originated in India. The practice is often cited as being 5,000 years old, and having started in ancient India. However, many historians would disagree with this idea. Research suggests that the therapy may have first come about in Africa, instead. More specifically, they believe that the real origin of yoga was Egypt, where a practice was created known as Kemetic Yoga. In this article, we explore the African origins of yoga in more detail. Additionally, we will discuss a few basic Kemetic postures. If you’re interested in reaping the benefits, it’s worth picking up a good-quality yoga mat to practice on.

What is Kemetic Yoga?

Created by the ancient Egyptians, Kemetic Yoga is a style of yoga that focusses on physical movement and controlled breathing techniques. The therapy also incorporates meditation, too. The original system is thought to be over 10,000 years old; however, modern versions of the ancient style have since been developed based on the research conducted by Dr Asar Hapi and Master Yirser Ra Hotep during the 1970’s.

Like all styles of yoga, Kemetic boasts a variety of great benefits. Working to heal and restore the body, the style focusses on correcting spinal alignment and defects in the skeletal muscular system. By doing so, the practice is thought to relieve muscular stress, improve blood circulation, and encourage prana to flow smoothly throughout the body. By improving blood circulation, yoga helps nutrients and oxygen to be distributed to the vital organs.

While modern yoga focuses on stretching the muscles, the Kemetic style concentrates on creating the optimum environment for the body to heal itself. With this in mind, Kemetic is favourable for those looking to heal and regenerate their body. As each of the Kemetic postures is gentle, the practice places little stress on the muscles; this means that the risk of injury is minimal.

As mentioned previously, research suggests that Kemetic Yoga was first practised in Egypt over 10,000 years ago. Many years later, the practice is believed to have migrated to India and become widely used; hence why the Indian heritage of yoga is often cited.

The theory that yoga originated in North Africa is based on ancient hieroglyphics and artwork. The ancient Egyptians are famous for using symbols to express their philosophies and ideas. Often carved into the walls of tombs and caves, the symbolic drawings are better known today as ‘hieroglyphics’. Thanks to these ancient carvings, modern historians are able to encode the messages and get an idea of their view of the world.

The artwork related to Kemetic Yoga was found carved into a wooden chair in the tomb of Tutankhamen. The image is believed to be a man called ‘Shu’, who represents the concept of breath. After studying the carving, historians spotted a sun disk and two snakes at the top of Shu’s head. It is now believed that the sun disk represents the crown chakra, which is associated with energy, intelligence, and enlightenment. The snakes are thought to represent the channels in which energy flows through the body. 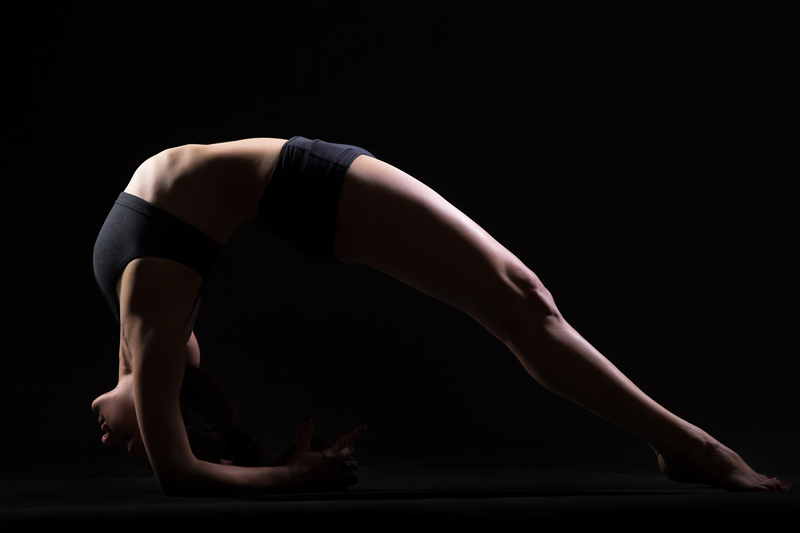 The philosophy of Kemetic Yoga is thought to be based on self-development. Focussing on physical postures and controlled breathing patterns, the practice encourages the body to heal and develop. Kemetic movements are carried out slowly compared to other yoga styles. The idea behind this is that practitioners can move gently into position, rather than forcing themselves.

While Kemetic Yoga is its own style, many of the postures are similar to the standard Hatha poses. However, they are all practised in a much slower manner. In Kemetic Yoga, students are encouraged to take their time with each movement, allowing time for the body to ease into position. In addition to reducing the risk of injury, this approach is thought to encourage the body to heal and rejuvenate. Below, we explore a few Kemetic postures.

A popular Kemetic posture, Mummy pose is simple to practice. To start, lie down on your back while keeping both legs stretched out. Next, place your left arm across your chest and rest your left hand on your right shoulder. Repeat this process with your right arm, placing your right hand on your left shoulder. You are in Mummy Pose. Take this time to concentrate on your breathing for as long as you feel happy doing so.

Immortality Pose is one of the most renowned Kemetic Yoga postures. Designed to build strength in the ankles and knees and also improve energy flow, Immortality Pose encourages correct spinal alignment and ensures that the vital organs get the correct nutrients. To practice the pose, kneel down on your mat with your right knee up, sitting on your left calf. Next, place your hands into a prayer position and press your right elbow against your right inner thigh. Twist your body round to the left, breathing out as you do so. When you are ready to inhale, extend both arms out to the sides and bring your hands into a loose fist. You are in Immortality Pose. Hold the position for a few seconds before repeating the process.

Encouraging the practitioner to feel grounded, Tree Pose is often practised within a Kemetic sequence. To begin, stand tall with your feet together. Touch your big toes together, leaving half an inch of space between your heels. Next, touch your palms together in front of your chest and engage your abdominal muscles. Slowly shift your weight onto your right foot, rooting it down by pressing firmly through the ball of your heel and big toe. Gently lift your left foot off the ground, bending the knee as you do so. When you’ve established a sense of balance, place your left foot on the inside of your right thigh. You are in Tree Pose. Hold the posture for 30 seconds before switching sides.

Whether you’re an experienced yogi or a complete beginner, practising this original African style of yoga can benefit both the body and mind. Before beginning, it’s worth picking up some breathable yoga clothes to practice in. This will allow the body to oxygenate sufficiently, and enhance the positive effects of the style.