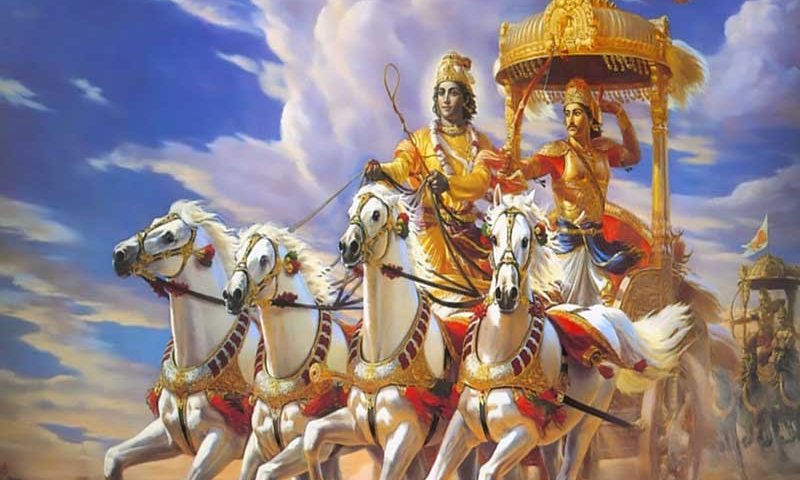 Scribed in original Sanskrit, the Mahabharata & Rāmāyaṇa are the two major religious texts of Ancient India. The poetics stories focus on the power of the gods, originally produced to create ideas for individuals to follow, providing them with something that almost became a guide to everyday life. Although the collection is vast, the better known of the texts are poems known as the Ramayana and the Mahabharata. In this article, we will be looking into the religious texts in more detail, focusing on both their stories and their teachings, discovering exactly what it is that makes the texts so famous and well-loved.

Deriving from the phrase ‘Great India’, the Mahabharata is thought to have been composed somewhere in-between 400 and 100 BCE; although, the truth behind this date this remains unclear. Although the original text is believed to have been written by a Brahim named Vyasa, over the years numerous religious writers and editors have been known to add to the work, making the Mahabharata grow to over three times its original size. After it was finally completed, the text was divided into eighteen entire books, each consisting of multiple verses holding an array of different teachings. Set around the time where Aryan tribes in Northern India were uniting into various different kingdoms, each of which was then battling to create an empire. The main focus of the original religious poem is believed to be on points of morality; teaching readers the difference between right and wrong. Krishna, one of the stories heroes, is described as a person of royalty, formally descending from the gods – more specifically, an eighth incarnation of the god, Vishnu. All of the heroes depicted in the tale are described as power-hungry but, at the same time, consistently devoted to the truth with a strong sense of duty and affection for their families and loved ones.

Later additions to the Mahabharata leant more focus on the gods Shiva and Vishnu. One of the most famous stories incorporated into the huge religious text is titled the Bhagavad Git, which translates to ‘The Lord’s Song’. This story is known worldwide, commonly shorted to the Gita. Still incredibly popular today, the Gita became Hinduism’s most favourable religious text; read, loved and referred to daily by individuals worldwide. The Bhagavad Gita begins by Vishnu acquiring a new incarnation named Krishna. Originally a non-Aryan god, Krishna came from Northwestern India. In the first edition of the Mahabharata, Krishna was referred to as a secondary hero believed to a god who appeared in the form of a human. Later, in the Gita, Krishna became the Supreme Deity, appearing again in human form.

In the Gita, Krishna explains that one could have all the possessions in the world without losing blessedness, as long as one shows the same outlook on success and failure. One should be generous, kind, fearless and patient. One should always remain compassionate towards others, including all creatures. One should remain without arrogance, greed, hypocrisy, wrath or harshness in speech, and above all else, one should have a strong moral compass, sense of duty, and nothing but love and affection for their parents and families.

Krishna went on to become the most loved out of all the Hindu Gods, someone who was looked to as a teacher, a god who solely believes in love over war in addition to a god that gives those who choose to worship him, the gift of grace.

Commonly referred to in its translated form, the Ramayana is better known as the Story of Rama. The ancient text is thought to have appeared somewhere between 400 and 200 BCE. Believed to have been originally written by a Brahim named Valmiki, the Story of Rama was scribed in a new and intriguing style of poetry that had never before been seen; a style that was then recreated for centuries following the realise of the Ramayana.

Containing a mammoth seven books consisting of a total of 24,000 verses, the story told in the Ramayana is set centuries before the book’s release. Set around the time that Aryans were expanding their influence over Dravidians in Southern India, the text begins with the Aryans engaging in an array of missionary plans, with the support of the military backing them all the way. Focusing on a strategy of divide and conquer, the poem praises the heroism and beliefs of Aryan warrior-princes, known as the Kshatriyas. Throughout the text, the story focuses on the main character, a prince named Rama, taking the chance to describe his entire life from birth to death. Together with his brothers, Rama is depicted as taking on the ideals of Aryan culture, particularly traits such as loyalty and honour, faithful and dutiful sons, affectionate brothers and loving husbands, men who are not afraid to speak the truth, who are strict, and ultimately men who are willing to make sacrifices for the right purpose; particularly against the evils of greed, lust and deceit.

The one thing that both the ancient texts have in common, is there renowned religious scripture written in the traditional Sanskrit language. Many choose to still live by the suggestions outlined in the texts still to this day, referring back to them if they ever lose their path. In The Bhagavad Gita, it advises us that the quickest path to reaching the divine is by practising Karma-Yoga. Still, to this day, Many Yogis feel that flicking through the Gita enables them to connect on a deeper level with the meaning behind the traditional practice of yoga, due to the original techniques being outlined in one of the initial verses. Whether you are interested in taking on board the many  religious teachings that the ancient Sanskrit texts have to offer, or you are interested in getting out your yoga mat and having a go at some of the original postures, both the Mahabharata and the Rāmāyaṇa can teach us some valuable life lessons and are a sure way to form a deeper connection with ancient history.