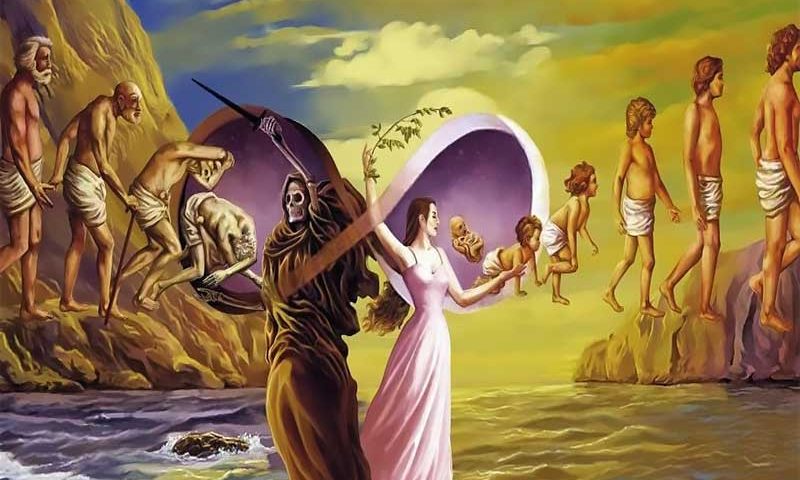 Well-known for its beliefs in reincarnation and life-after-death, Buddhism teaches that there are two select ways someone can be reborn. Firstly, there is the potential to be reborn involuntarily, not getting a choice of who, where or with whom you live your next life. The decision is ultimately down to the idea known as Karma, meaning that your fate is dependant on your behaviour throughout your lifetime. Unfortunately, this is the fate of most of us. Occasionally, though, a select few are thought to be able to have a say in their rebirth; getting the option to choose their place and time of birth and even their parents. Being privy to this special option is achieved through the power of compassion, and carrying out a prayer to benefit others throughout one’s lifetime. Even though many people boast the qualities of compassion, kindness and even selflessness, it is still uncommon for individuals to be seen as pure enough to get a conscious choice in their rebirth. The lucky few that do get this option, are known as tulkas.

Prior to the time of Buddha, ideas related to topics such as existence, birth and death and the meaning of life were constantly being questioned, with no religious figure able to provide an affirmative answer for people to cling onto and believe in. It is thought that the ancient Indian Vedic and Sramana school taught and believed in the idea of soul, karma and the cycle of rebirth. Indian materialist schools, on the other hand, preached against this belief; instead suggesting that there is just one life, with death marking complete annihilation. The general public was split between these diverse views, with little knowledge of who to believe. Luckily, it wasn’t long before Buddha confirmed the concept of rebirth, documenting in various Buddhist scriptures that other worlds existed.

Since there actually is another world (any world other than the present human one, i.e. different rebirth realms), one who holds the view ‘there is no other world’ has the wrong view…

In addition to confirming beliefs on rebirth and life after death, Buddha also suggested that Karma exists, too. Although still believed to influence future suffering through the cycle of rebirth, Buddha implied that a way to end the cycle of karmic rebirths did in fact exist, achieved only through nirvana.

The ancient Sanskrit text known as the Bhagavad Gita (Gita for short) implies that the soul departs when the body dies. The appearance of the outer body and the psychological makeup including likes, dislikes and phobias that one receive in their next life is dependant on the actions of their current one. These actions can be referred to as karma. It is believed that ones positive and negative doings are all recorded; consequently, nobody really gets away with anything – even after death. The Gita teaches that any negative or positive actions one demonstrates in their current life, they will pick up from where they left off as they are born again. For instance, if one starts being intentionally spiteful and doesn’t try to change these tendencies, in their next life they will continue with these traits; with the same principle applying to positive actions.

The mind functions based on its conditioning, which is all believed to be dependant on past actions. Consequently, when the body passes away, the mind and soul of that person get transferred into another body, ready to continue where they left off. It is thought by some that even during foetal life in the womb, the mind has the ability to recall events from the previous life. Studies have shown that babies have the ability to dream before they have even exited the womb. Some Buddhists believe that this confirms rebirth does truly exist, because if the foetus hasn’t lived before, then what else could they e dreaming of other than their previous life.

When the mind and soul are transferred to a new body, although the exterior is different, it is thought that the mind more or less stays the same. Buddhism teaches that the people we become in our current lives are almost identical to the people we were previously – in terms of mind and soul. This theory can help to explain why some children seem to entail past life memories. Often very specific with the ability to be verified, the memories are believed to be so vivid because they are, in fact, real.

Most Buddhist firmly believe that the soul moves through different bodies until it rids itself of anger, greed, envy and pride, ultimately becoming pure again. When this happens, the cycle is thought to stop as the soul is believed to have reached Nirvana.

In certain circumstances, it is deemed possible to identify a certain soul after the process of Reincarnation/Rebirth. A group of Buddhists known as the Karmapas were thought to be the first to create a system of identifying a soul after its demise. Records show that before their death, they take time to write a letter of prediction, estimating where their next incarnation is likely to be found. Obviously, there is no way of knowing how realistic these estimates usually are as the Buddhist faith suggests that in most cases, one will have no say in the body they are reborn into. Separate to the method of the Karmapas, there have been other cases of successful identification, most of which usually involve a mixture of dreams, subconscious thoughts, and divination.

Regardless of whether you follow certain aspects of the Buddhist faith, or you get your yoga mat out daily and submerge yourself in the religion as a whole, the majority of Buddhists strongly believe in life after death and the cycle of rebirth; the nature of which depending largely on karma and the choices you make in your previous life.